At one time 'The Strategists' shared a fascination for the English Civil War and many a pleasant hour was spent pitting 15mm Freikorps Round-heads against Royalists. The rules in vogue at the time were Forlorn Hope. They fitted the bill but as I recall quite a bit of time was spent adding and subtracting factors and such like and many a game ended in an inconclusive draw. As the clock got closer to midnight, thoughts of work and an early start put an end to further game-play.

With the emphasis on quick-play rules these days Dragons Rampant and its numerous derivatives has gained favour with us for Dark Ages, Medieval / Samurai and now ECW with the Pike and Shot version,  Pikeman's Lament.
Recently I had the good fortune to purchase a superbly painted and based Royalist ECW 28mm Army at an annual bring and buy. Obviously this rekindled my interest in ECW.
Our first game went surprisingly well considering we had 6 players involved. Fortunately the rules do not differ significantly from the other versions other than unit stats and points values and a number of period flavour special abilities such as the Caracole for trotters and Skirmish /Evade for dragoons.
Detractors from this 'one rule system suits all style of gaming' say that it does not truly represent the specific characteristics and flavour of any period. No doubt there's some truth to that but when you only have 2-3 hours of an evening to assemble the layout array the troops and fight to a conclusion we have found simple does the trick for club nights. Also the rules are easier to remember so you don't have to reinvent the wheel each time.

The game was a simple "line up two relatively even forces against each other in an encounter battle and see how it plays out" type of thing. Purists shield your eyes as you will no doubt spot numerous Royalist flags merrily waving in the breeze on the side of the Parliamentarians.

The game started auspiciously for the Parliamentarians as their field gun tore a gash through the Royalist foot on their first shot. Much back slapping amongst the gunners...probably just happy the bloody thing didn't blow up in their faces. 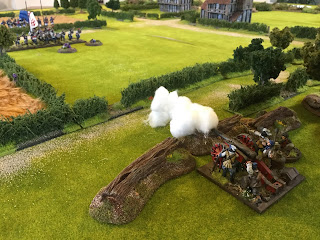 The Parliamentarians arrayed themselves in the customary formation of cavalry on each flank and foot in the Centre. The Royalists, having somewhat less cavalry, dispensed entirely with cavalry on their right flank. Instead they chose to array all their cavalry on their left, clearly planning to smash through the enemies cavalry and break through on the centre from the flank whilst holding off the Parliamentarian cavalry with firepower and their sharp pointy pikes on their Right. 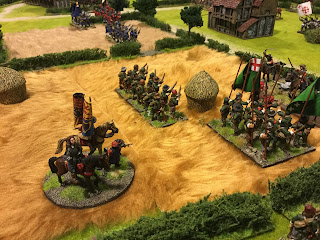 The Parliamentarian Left flank cavalry advanced to within pistol range of the Royalist and and successfully activated a caracole attack with the intention of breaking the enemies resolve and forcing them to give ground which would allow a follow up attack while the enemy had their backs to them. Unfortunately for the cavalry the infantry steadfastly held their ground despite murderous point blank fire from the horsemen and some choice anglo saxon cursing. A well aimed return volley sent the cavalry trotting back out of range to regroup in disorder and humiliation. Not a memorable first night appearance for my new troops. 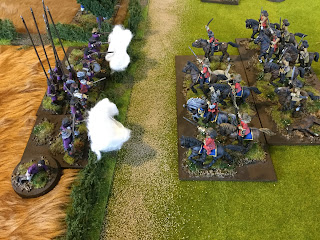 Sadly for the Parliamentarians their gunners seemed to have been overcome with the success of their first round and decided to break out the rum thus all further shots flew wildly over the heads or fell short of the enemy for the rest of the game. The cooler heads of the Royalist gunners however prevailed and they repeatedly chipped away at the enemies neatly arrayed ranks of foot.

The Royalists cavalry assault on their Left flank was met head on by the Roundhead cavalry who not only held their own but pushed the Royalists back. Several repeat attempts by the Cavaliers met the same fate and as the day wore on it was clear they were a spent force. 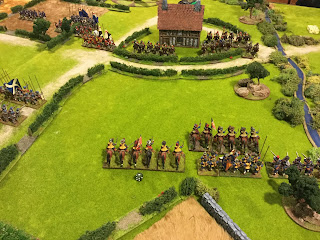 In the centre both sides were within musketry range but the superior marksmanship of the Royalist musketeers and the ever increasing casualties from artillery had seriously affected the morale of the Parliamentarians and it was becoming impossible to activate them or rally them. It was clear a collapse in the centre was imminent.

The Parliamentarian cavalry on the their left failed to get back in the fight and repeatedly refused their activation rolls which left the Royalist foot free to move to the Centre to assist their comrades to seal the Parliamentarian's fate. 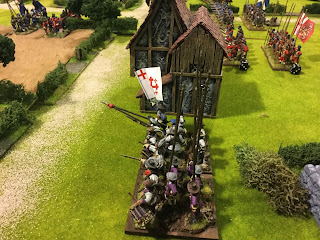 All in all we felt the rules meet our requirements admirably which are:
Quick-play and bloody with no faffing about.
Played to a conclusion in under 3 hours.
Easily digested and remembered.
Minimal book-keeping and referencing factor sheets (Continual adding and subtracting)
Fun, fun, fun!